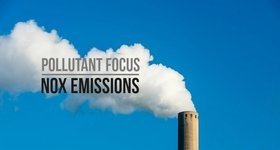 NOx emissions / Oxides of Nitrogen is a term for the mono-nitrogen oxides Nitric Oxide (NO) & Nitrogen Dioxide (NO2) and their oxidation products, principally Nitric Acid (HNO3).

Oxides of Nitrogen are a significant air pollutant particular in urban areas where vehicular and industrial contributions are more prevalent.

Oxides of Nitrogen are created naturally by processes such as lightning bolts where sufficient heat splits Nitrogen molecules (N2 to N & N) and facilitates the reaction of Nitrogen and Oxygen to form NO and thereafter NO2.

It is however the anthropogenic contribution to Oxides of Nitrogen formation that causes more concern. At typical atmospheric temperatures and pressures Nitrogen and Oxygen will not react. Where temperatures exceeding 1200°C occur, such as in a fuel combustion chamber, Nitrogen and Oxygen do begin to react to form ‘Thermal NOx’. The rate of Nitric Oxide formation also increases as a function of increased temperature. This explains why diesel compression engines, which ‘run hotter’ create more NO than petrol spark engines or gas turbines.

Where the combusted fuel itself is typically rich in nitrogen (e.g. coal & heavy oil), during the combustion process, nitrogen bound in the fuel is released where it to can go through the same reaction with oxygen to create ‘Fuel NOx’.

Where excess oxygen is present in the combustion chamber, Nitric Oxide is oxidised to Nitrogen Dioxide.

What’s The Concern Regarding NOx Emissions

Oxides of Nitrogen and their reaction products can cause a range of health and environmental effects:

+ Nitric Oxide is a colourless gas that is only mildly toxic. When oxidized it forms Nitrogen Dioxide which is a brown odorous gas that at sufficient concentrations can cause respiratory problems in humans. The reaction of NO2 with haemoglobin in the blood causes oxygen deficiency.

+ Oxides of Nitrogen that react with moisture (and other chemicals) in the atmosphere form Nitric Acid. Like Ozone, Nitric Acid is efficient at damaging lung tissue and is directly linked to many respiratory diseases.

+ Nitric Acid is also one of the primary causes of Acid Rain. Where moisture in the atmosphere (containing acidic compounds) condenses (formation of clouds) and precipitates (rain, snow, fog, dew) it can have a harmful effect upon the natural and built environment. Acid rain is harmful to vegetation, causes eutrophication of lakes and seas which in turn is harmful to its flora and fauna, corrodes steel structures and weathers stone buildings.

The good news is that the anthropogenic contribution to Oxides of Nitrogen formation in the UK has decreased rapidly over the past twenty-five years.

Approximately 30% of all NOx emissions are accounted for by industrial combustion sources, 25% by road vehicles, 25% by power and heat generation and 20% by other transport sources.

Whilst all sources have dramatically reduced their contribution over recent decades, some have been more successful than others. Since 2010, the contribution from industry has overtaken road vehicles as the largest source of NOx production in the UK.

With all of this in mind, it is important therefore that industry is properly regulated to ensure that the emissions of NOx are minimised.

Typically combustion processes are regulated in the UK by the Environmental Permitting Regulations (2010). Shortly the Medium Combustion Plant Directive will be written into UK law.

Both of these statutory tools ensure that regular accredited NOx monitoring (and other pollutants such as VOC Emissions) is undertaken on relevant process to quantify emissions so that they can be better recorded and understood.

Envirocare are a UKAS and MCERTS accredited emissions monitoring laboratory. We specialise in monitoring emissions from industrial facilities across the UK and further afield.

We currently hold accreditation to two methods of monitoring Oxides of Nitrogen:

We would be delighted to speak with you about your monitoring requirement. For more details on NOx monitoring, NOx testing or a full range of our Stack Emissions Monitoring accreditations please feel free to either call us on 01274 738668 or fill out our quick and easy Enquiry Form.

For more information on any of our services, please call us on:

Are You Aware of Breathe Freely?

Are You Aware of Breathe Freely?