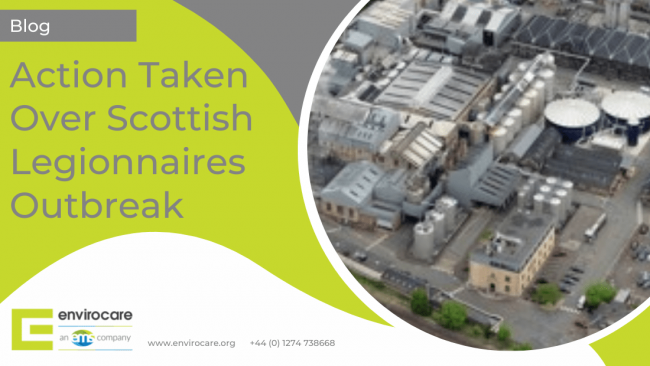 The HSE has served an Improvement Notice on an Edinburgh company for alleged failures to control adequately the risk of legionella in a cooling tower.

The move follows an outbreak of Legionnaires’ disease in the city, which, since the first case was identified on 28 May, has claimed one life.

The notice was served on the North British Distillery Company Ltd, in relation to one cooling tower on the Scottish capital’s Wheatfield Road. However, the company has chosen to take all four of its cooling towers out of operation since the Scottish Legionnaires Outbreak.

Information previously released suggested that the source of the contamination had been isolated to four cooling towers in the south-west of the city. The HSE, together with the City of Edinburgh Council’s environmental health service and scientific service carried out an investigation, and samples were taken from four facilities – including the North British Distillery Company – which also received chemical treatment.

The company has 21 days to appeal the notice, which was served for a failure to devise and implement a sustained and effective biocide control programme in one cooling tower.

The total number of cases of the Scottish Legionnaires Outbreak so far confirmed since the first was identified on 28 May is 61. A 56-year-old man with underlying health conditions died while being treated at Edinburgh’s Royal Infirmary. However, Scottish Health Secretary Nicola Sturgeon said yesterday that those being admitted to hospital with symptoms now are, “generally speaking, in a better state of health than has previously been the case”.

Dr Duncan McCormick, consultant in public-health medicine at NHS Lothian, speaking yesterday, said: “We remain confident – based on the available evidence – that the general source of the infection has been identified and that the treatment to the cooling towers will prove successful. We are expecting cases of the Scottish Legionnaires Outbreak to continue to emerge over the next few days.”

The HSE has emphasised that issuing the Improvement Notice does not mean that this cooling tower has been identified as the source of the outbreak, saying “it may never be conclusively identified, based on our experience from previous outbreaks”.

Meanwhile, a leading trade union has warned that more public-health scares like the Legionnaires’ disease outbreak in Edinburgh are inevitable in the face of regulatory cut-backs.

Prospect, which represents 1400 health and safety professionals, said today that the legionella contamination in the Scottish capital is a “stark reminder” that cuts to public services can create dangerous and ultimately expensive health-related issues in the longer term.

Emphasising the fact that the HSE has reduced the number of proactive inspections it undertakes by one third, the union said whole sectors of industry are now exempt from inspection.

Said Prospect’s HSE branch chair, Simon Hester: “Due to spending cuts, the HSE’s occupational-health expertise is extremely thinly spread, which has led to a lack of sufficient advice in the field. It is always preferable to avoid incidents that harm people, rather than merely investigating after the event, so Prospect believes that decisions on proactive inspection should be based on professional expertise, and that adequate resources are made available. The HSE needs more inspectors, not fewer.”

The HSE has revamped the ‘Legionella and Legionnaires’ section of its website to remind duty-holders of the importance of controlling risks from man-made water systems.

You can read more information via the HSE Legionella Guide.