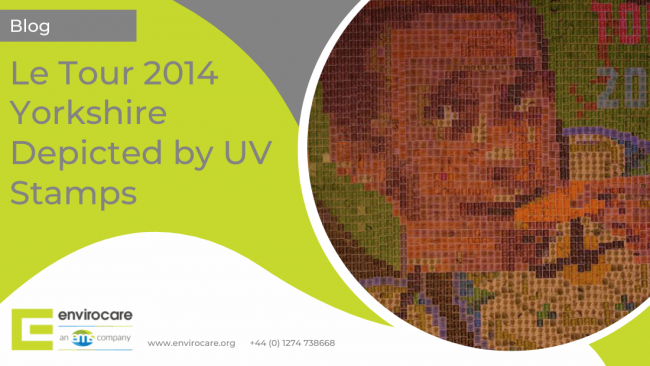 Clients who have been with Envirocare for a number of years may remember Keith Edmondson, who was instrumental in setting up Envirocare in 1994. Since retiring to take things a little easier; he has, in his words, ‘swapped earning a crust in the art of science into applying a little science into art for a change!’

After many years as a lapsed philatelist, he made a serious effort at bringing himself up to date with GB phosphor band varieties, he purchased some long and short wavelength UV lamps and started a rapid learning curve. Keith was immediately struck with the variation in brightness and colour under long wave UV of both the stamps and some phosphor bands and wondered if this could form the basis for being scaled up into some form of artwork under controlled lighting conditions.

Initial trials indicated that interesting visual effects could be achieved by controlled fading of tungsten lights in combination with UV lighting.

Keith argues that UV light could be considered as an alternative 3rd dimension of art. This has been demonstrated with collage impressions of famous Bradfordians, David Hockney, J B Priestley and Sir Ken Morrison (Which is now hanging at the head office of Morrisons in Bradford) composed from modern British postage stamps, which have these fluorescent phosphors printed on them for sorting purposes.

These have all been previously exhibited in Bradford at the PoP Up gallery 2011 and at the Bradford Science Festival in 2012 but now with his latest artwork, ‘Bradley Baht ‘at!’ completed he looks forward to Le Tour 2014 Yorkshire (Tour de France 2014) coming to Yorkshire in July. The picture shows the visual effects possible using the postage stamps collages illuminated by tungsten/ UV light.

The impression depicts Sir Bradley Wiggins against the backdrop of the Cow and Calf on Ilkley Moor, fittingly not wearing a hat! (for those unfamiliar with the song; ‘On Ilkla Moor baht ‘at.’ Baht, in Yorkshire dialect, means without!)

The wheels of the Penny Farthing bicycle symbolically contain the White Rose of Yorkshire inset, on a country road with cats’ eyes, which were invented in Yorkshire by Percy Shaw. It is confidently predicted that even in a Yorkshire Summer, nobody will catch their ‘death of cold,’ on Ilkla Moor!

The composition is a collage of over 4,000 modern British used postage stamps. We wish all the cyclists including Bradley Wiggins the best of luck during Le Tour 2014 Yorkshire later this year. For further information on Keith’s artworks is available on his Stuck On Stamps Website.