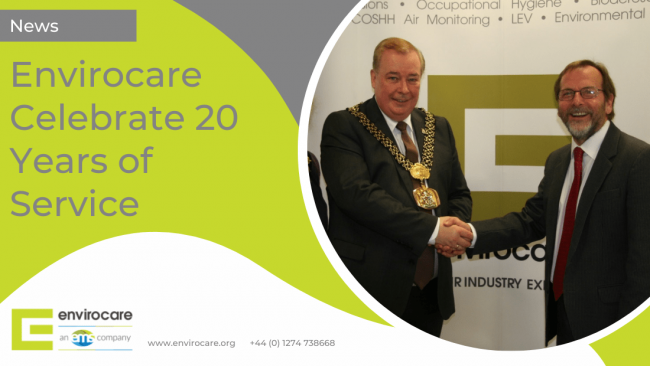 October heralded 20 years as a business for Bradford based Envirocare, one of the UK’s leading Environmental and Occupational Hygiene & Safety consultancies.

The company was originally formed in 1994 by Tony Smith, Keith Edmondson and Alden Phillips, three highly qualified individuals who had previously worked as independent consultants delivering stack monitoring and occupational hygiene sampling around the Bradford area.

20 years later Envirocare has progressively grown, expanding its workforce, expertise and range of services along the way, including a broad scope of MCERTS accreditations, being one of only very few consultancies to hold UKAS accreditation for their services and been recognised nationwide as industry experts in the field of both Occupational Hygiene and emissions monitoring.

To coincide with the companies platinum anniversary, Envirocare have embarked on its biggest rebrand in history, launching at the RWM Exhibiton – Europe’s premier event dedicated to resource efficiency and waste management solutions and a celebratory event at Bradford Universities re:centre named E20.

The E20 event was attended by long time clients, partners, suppliers, council members and The Right Worshipful the Lord Mayor and Mayoress of Bradford which celebrated the companies many accreditations including Investors In People and the highly commended award at The Telegraph & Argus Bradford Means Business Awards.

Envirocare plans to roll out further information and activities highlighting how the company has evolved from its early beginnings in the stack emissions monitoring industry throughout the year and how they expect further growth moving forward.

Envirocare is a leading UKAS and MCERTS accredited Environmental and Occupational Hygiene Consultancy based in Bradford, West Yorkshire.